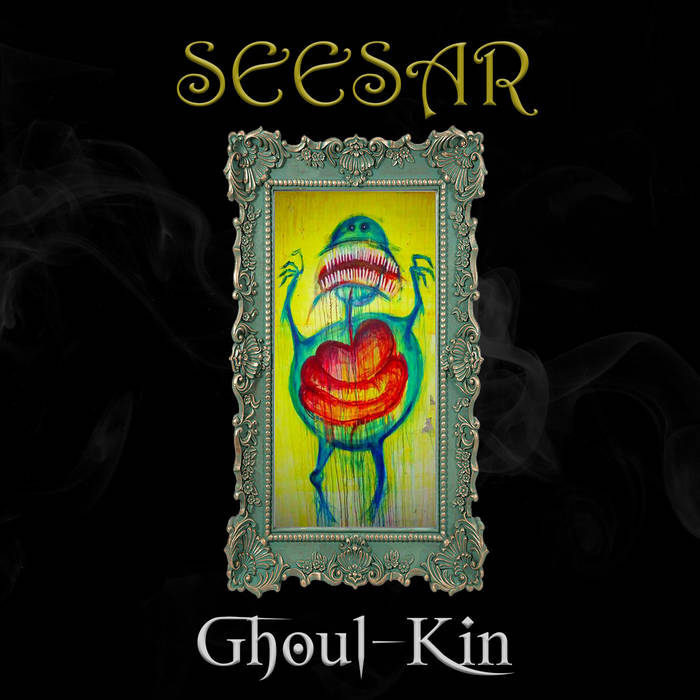 I am very happy to announce thee exceptional sekond release from Seesar for Sombre Soniks, now based in China, as he kontinues his exploration into thee works of HP Lovecraft! There is also a pdf with detailed explanations and instrumentation used plus graphik skores for each komposition!

From thee Artist:
"The new release, entitled Ghoul-Kin marks a move forward for Seesar's development of Lovecraftian Futurist creativity. Beyond the fact that this will be the first full release written and recorded in my new home of Shanghai, China, complete with new facilities, new equipment, and lots of new sounds, including an instrument I'm calling the Buzzophone (I'm sure there's another name for it, but that's my name) and different usages of vocal sounds, the release is the first Seesar release that is conceptual thematically from beginning to end.

Plenty of artists have made concept albums, of course, but this is significant for me because the story cycle taken as an influence for the tracks allows me as a composer and performer to increase the depth with which I engage both the Futurist elements and Mythos representations of the music, thus affording me the means to further suggest ways in which the tracks not only host their own associations with these factors, but also ways they support and intertwine with the other tracks, making Ghoul-Kin and total package of Lovecraftian Futurist sounds, rituals, and ideas embodied within one narrative.

Ghoul-Kin draws from the tid bits of information in various Lovecraft stories we know about Robert Upton Pickman. At one point, he's an artist, painting super-realistic versions of horrible creatures and unspeakable terrors, and, as the reader discovers, with details gleaned from real-life situations; situations which are the undoing of Pickman. At another point, and earlier point, in fact, he lives on the Moon. "A ghoul who used to be the man named Pickman" leads a regiment of ghoul warriors to defeat a small army of Moonbeasts, and is pronounced chieftain of the ghouls. The stories are quite at odds with each other, in that one is a story of a seemingly normal human, who turns out to be a monster and is dealt with by ghouls, whilst the other story is a seeming monster, who turns out to be a great leader and is (in some creature's eyes) civilized and intelligent (when, in actuality, both incarnations of Pickman are exceptionally dark and ruthless). The narrative elements of these two tracts of tales allowed me to utilize sonic expression to depict this connection and juxtaposition through use and reuse of thematic instrumentation and manipulation, also unifying the tracks of Ghoul-Kin to generate a complete Lovecraftian Futurist experience for the listener.

I have, as usual, created scores for each of these pieces before or as I was in the studio. For Ghoul-Kin, I has employed a "revamped" notation system for scoring the works, drawn more heavily from Luigi Russolo's Italian Futurist notations system and Anthony Braxton's use of colour coding to add additional levels of "parametered" improvised sections to the piece, in hopes of lending an additional element of "the Unknown" to the music.

Sombre Soniks is being kind enough to offer an electronic collection of these scores plus more specific liner notes for each track. It is my hope this spurs interest in other Lovecraftian Futurist artists to either realize their own version of these works in live, studio, solo, or ensemble settings; or inspire them to create a similar track set of their own that others may perpetuate in a similar fashion."